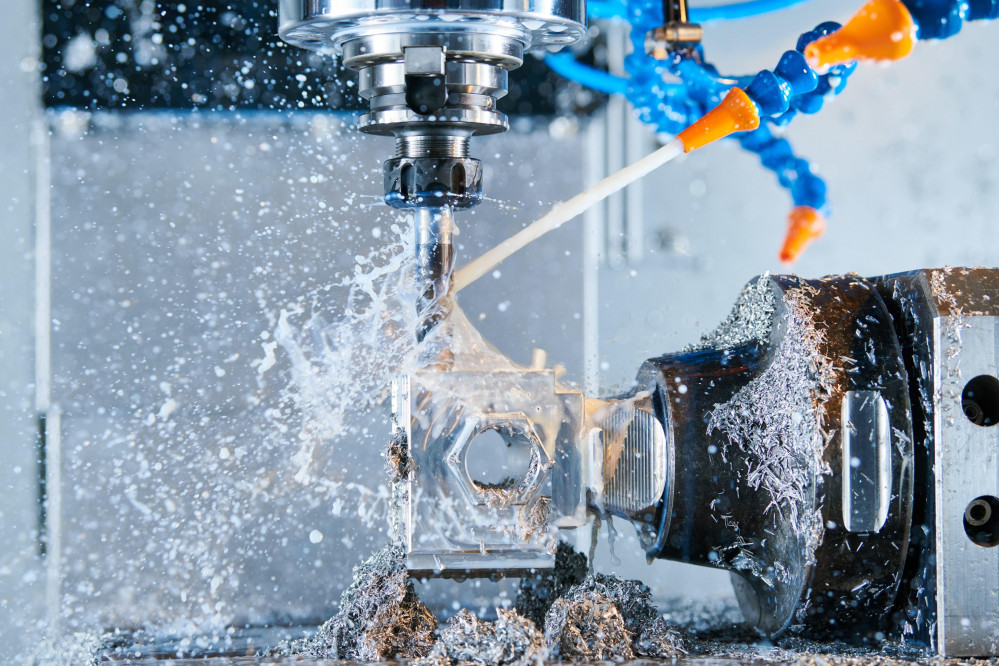 TWP Manufacturing confirms FOLIA metalworking fluid from Total, which is based on bio-sourced polymer technology and free of mineral oils and solvents, is a revolutionary product that supports with health and safety compliance.

TWP Manufacturing was founded in 1996 and is a high-quality presswork and injection moulding business servicing a wide variety of sectors including automotive, construction, electrical and white goods through to high-profile leisure and retail brands. Based in the West Midlands, the company employs some 40 people with a current turnover of £3.5million which it plans to increase to £4.5million in the next two years.

TWP Manufacturing produces a variety of parts for all automotive sectors, including major OEMs. As a diverse business, it also produces a raft of other items which it has designed and developed in-house.

Having previously subcontracted its CNC operations in the UK and overseas, TWP has brought this work inhouse, and in just 12 months brought on seven additional CNC machines. Manufacturing around 30,000 parts a month, TWP needs its CNC machines operating in peak condition - central to this is using an appropriate lubricant.

TWP wanted a solution that addressed health & safety requirements while providing greater versatility and efficiency. TWP had previously used a conventional semi-synthetic coolant, known as suds, but found this gave off an undesirable odour, was not kind to the skin or clothing, and due to its oil content, the pH levels had to be continually monitored.

Phil Stanley, director of TWP, already understood health & safety regulations particularly in relation to welding mist, but being relatively new to CNC machining, he turned to Total to see if it could recommend a metalworking solution that would help with this compliance. Total recommended FOLIA, which it introduced to the UK market in 2019. Based on renewable raw materials in the form of a biopolymer, and free from mineral oils and solvents, it offers extraordinary performance and versatility coupled with industry-leading health, safety and performance benefits.

From a Health & Safety perspective, FOLIA emits no odour and has a reduced tendency to mist during operation, with any mist that is produced not containing any mineral oil or carcinogenic fumes. This is not only safer for machine operators but has also removed the need for TWP to invest in demisting units, representing a capital expenditure saving of some £25,000.

FOLIA does not contain any pictograms and is therefore safer for operators to use, reducing the chances of skin irritation.
FOLIA also delivers the ideal working conditions for second operations.

Phil said: “Using a conventional fluid, you would have to degrease prior to welding or plating, but as there is no residue with FOLIA, machined parts can go straight to the welding bay because there are no fumes coming off them. FOLIA just evaporates and doesn’t hold the swarf to the job which is a major advantage.”
Being an oil-free solution, FOLIA reduces the chance of bacteria forming or growing in the sump and system and oil drain intervals have also been significantly extended. Phil said: “We’re finding that our liquid life is much longer – we’re now 12 months in and we still haven’t had to change the fluid in the tanks. Furthermore, there is no sludge at the bottom of the tanks like you’d get with a conventional lubricant.”

Tooling lifespan has increased by up to 25%, delivering a significant cost saving for the business.
The versatility of FOLIA has been another key benefit and means TWP can tap aluminium or stainless steel without having to change the fluid, “one liquid is suitable for all applications,” said Phil.

Phil said: “I’m very impressed with the health & safety benefits of FOLIA. As well as not giving off any odour, it has addressed all my concerns, giving me peace of mind that my business is compliant, and my employees are not at risk. Furthermore, the cost for adding mist extractors to each machine would have been in the region of £25,000, so I’m delighted that I haven’t had to do this, because with FOLIA, you do not need them.

“In terms of tool lifetime which we have seen increase by up to 25%, extended drain intervals, versatility and productivity, FOLIA has been revolutionary for our business.

“Now that I’ve discovered the benefits of FOLIA, I’ve got no intention of returning to conventional lubricant.”

Ask about FREE plans, other memberships Live and hybrid events or anything else.

Made in the Midlands is part of The Made in Group.

Thank you for your subscription.
The g-recaptcha field is required.
Chat with us!